ShopKirana doubled its revenue to Rs 400 crore in the pandemic year. The heady growth comes after a steady start

The loud command before the start of a race always intrigued Sumit Ghorawat. In school, nobody explained the young lad the meaning of the phrase ‘ready, steady, go’. In college, he would notice some of his friends getting disqualified in the track and field competition. The obvious reason was a ‘false start’ before the firing of the gun, but what led to the ‘false start’ was still a question mark for Ghorawat, who graduated in chemical engineering from the Dubai campus of BITS Pilani in 2009. Over a decade later, the 33-year-old has found the answer: The sprinters were ‘ready’, but they were not ‘steady’. 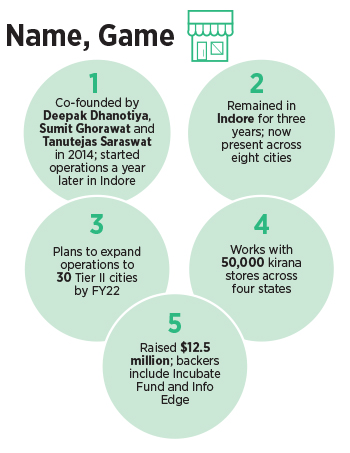 Ghorawat, and his friends—Deepak Dhanotiya and Tanutejas Saraswat—stayed steady after they started ShopKirana in Indore in 2015, and stayed put in the Tier II city till the end of 2018. The business-to-business (B2B) supply chain-focussed startup for mom-and-pop (kirana) stores started working with a handful of kiranas for a few months; closed the year with over 100 stores, gradually increased the network over the next few years in Indore, and closed FY18 with a revenue of Rs8.92 crore. “Now we were confident of our business model, and ready to move outside the steady,” recalls Ghorawat, co-founder of ShopKirana.

In December 2018, two years after the startup raised an undisclosed pre-Series A round, ShopKirana grabbed the attention of Info Edge. The backer of online food delivery Zomato, along with others such as AET Fund, pumped in $2 million into the startup. ShopKirana now forayed into Bhopal and Jaipur. The impact was dramatic. ShopKirana saw its FY19 revenue jump to Rs24.4 crore. Five months later, the startup bags a Series B round of $10 million in August 2019, and enters into five more cities. The subsequent uptick in revenue was again dramatic: A jump of over 9x to Rs200 crore in March-ended FY20. A year after the lockdown, ShopKirana has doubled its revenue to over Rs400 crore; the startup has kept its eight-city footprint steady; and is now planning a heady expansion across 30 Tier II cities in a year. 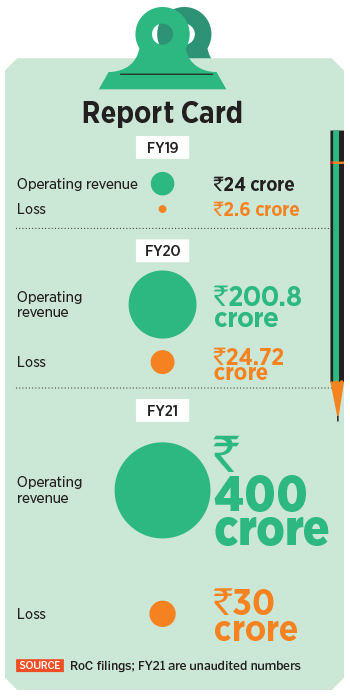 Ghorawat explains the magic behind the staggering growth. “It’s ready, steady, and heady,” he smiles, explaining how the startup got its act right. Staying in Indore for four years made ShopKirana ready with a business model which could be scaled subsequently. “A long one-city stint also made us steady,” he contends. The team figured out the unit economics. While the loss in FY20 was Rs24.72 crore, it marginally increased to Rs30 crore in the next fiscal. During the same period, Ghorawat underlines, revenue vaulted from Rs200 crore to Rs400 crore. “We now work with 50,000 kiranas across four states, including 3,000 in Indore,” he claims.

Though the pandemic—with grocery falling under essential services during the lockdown last year—came as a tailwind, ShopKirana had been running on rocket fuel much before the outbreak of Covid. The reason is not hard to find. India has an estimated 13 million kiranas—accounting for about 88 percent of FMCG sales—and most of them are light years away from embracing technology-led operations. From inventory management, reducing cost of operations, transparency in pricing, newer revenue streams to effective support on credit, GST support, digital payments requirements and credit management, startups are helping kiranas modernise and streamline operations. 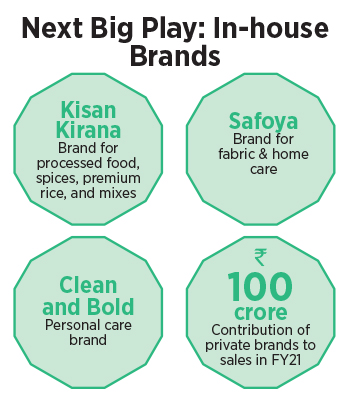 Shivathilak Tallam, senior investment associate at venture capital (VC) fund Unitus Ventures, explains what accelerated the adoption of technology by kiranas last year. As the pandemic disrupted the traditional supply chain, kirana stores opted for digitisation. SMEs in India, Tallam underlines, employ on average less than two people in India, and haven’t scaled. The reasons are many: Lack of access to credit, limited market access outside of hyperlocal presence, absence of reliable supply chain for procurement, and heavy prevalence of manual processes. “Kiranatech as a segment has the potential to unlock $200 billion additional value over the next few years,” he stresses. The segment is poised to see intense action as entrepreneurs will continue to find virgin land in the kirana business, and VCs will keep placing heavy bets.

Back in Gurugram, one of the early backers of ShopKirana is elated with the progress card. It is very rare to find a group of founders who have customer insights, the ability to think strategically, oodles of commercial sense and also best-in-class execution skills with capital efficiency, contends Sanjeev Bikhchandani, founder and executive vice chairman of Info Edge. “The ShopKirana team is one of the rare ones. We are fortunate to have found them,” he says. Three things, he underlines, worked for the startup. First, the counterintuitive strategy of betting on small kirana stores in an era of ecommerce and organised retail. Second, the willingness to get their hands dirty and the ability to go into granular details while executing. And lastly, the impressive way in which it has sailed through Covid and the lockdown to grow the business 2x with nearly the same cash burn. “All these make this company a winner,” he says. 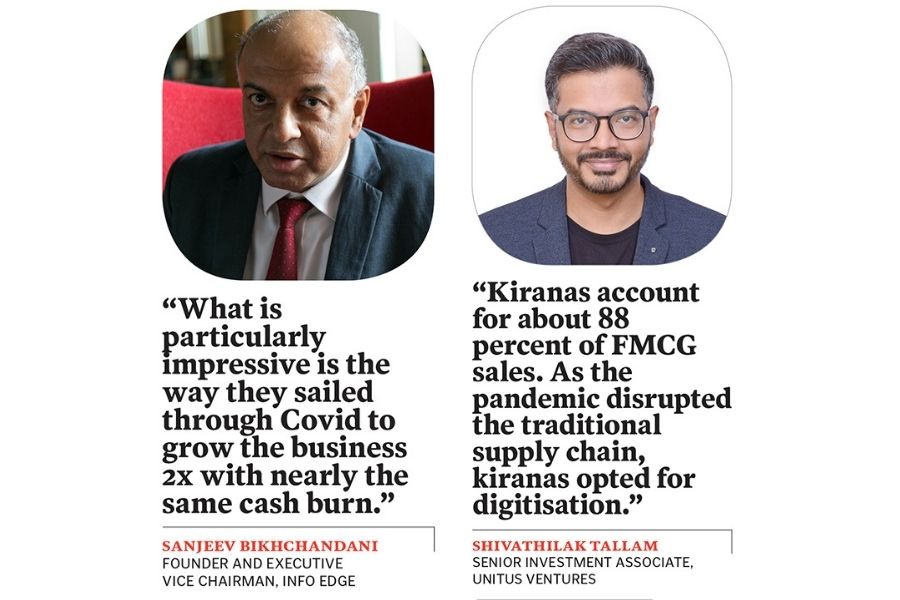 The winner, interestingly, also did something extra, which turned out to be the X factor. ShopKirana rolled out a bunch of in-house brands in late 2019 and used its vast network of kiranas to reach a scale over the next two years. The first brand was ‘Kisan Kirana’ which hadprocessed food, spices, premium rice, and mixes. Then came ‘Safoya’, a brand for fabric and homecare; next in line was ‘Clean and Bold,’ a personal care brand. “All the three brands together contributed to Rs100 crore in sales for FY21,” claims Ghorawat.

The trigger to start private labels was simple: Rich consumer insight gathered from kiranas. There was a big vacant space for high-quality and affordable brands. “We wanted to empower farmers and retailers,” says Ghorawat, adding that the products were sourced directly from farmers. “We wanted to create premium products for the masses and at an affordable price,” he says.

ShopKirana made a bold move to get into private labels, reckon marketing experts. For a startup which has been working closely with the kiranas, it was quite logical to make the most of the insights gathered. Take, for instance, kiranas know which products have a faster uptick, the requirements of the end-consumers and the gap that exists. “What they are doing is nothing but mimicking the distribution strategy of ITCs and HULs of the world in a very small way,” says Ashita Aggarwal, marketing professor, SP Jain Institute of Management and Research. ShopKirana is well-placed to connect demand and supply. “It can plug the gaps; being nimble gives it a faster pace of execution, and kiranas cut down their distribution cost,” she adds.

The challenge for ShopKirana though would come mainly on two fronts. First, it would be to maintain the quality of the products. “Its products are sold by push marketing,” she sounds a word of caution. In the long run, what it would need is ‘pull marketing’. Second, the big boys of grocery—ITC, HUL and others—might flex their muscle to cut the much smaller rival to size. This threat, however, might not materialise as the big players don’t pay much attention to small gains made by startups.

Ghorawat, for his part, is not bothered about the challenges. The entrepreneur is planning to roll out more products, enter new Tier II cities and expand at a furious pace. “It’s time for heady growth,” he smiles.